Back in August I was asked by a client of mine if I could decorate a bra for a charity auction. Before I even know what the charity was for- I said, "YES!!!" The relief I felt when I found out how great of a cause it was for was so amazing, I tell you!!

Turns out, the auction was to raise money for women's health in our county. Women who don't have the means to get annual health screenings, through this program, are given free PAP tests and mamograms. I felt so excited to be part of something so awesome.

After the excitement of decorating a bra wore off, I realized, I had to actually FIND one. (Coming up with the idea was like, instantaneous for me!) Every time I'd walk into Target or Walmart, I'd browse through the "intimates" section. At first, I was in SHOCK at some of the patterns available. I mean, zebra, really? Or how about red lips? I covered up my son's eyes a few times...he doesn't need to see things like that (for a few years anyway...)

One afternoon we walked into Target for "just yogurt" (which, being Target, ended up being a $50 shopping trip...) but we found THE bra! It was like the angels started singing, leading me towards the pink and purple snake skin bra. (Now, under normal circumstances, I'd RUN as fast as I could from a bra in this pattern/color, but for this event, it was PERFECT!!!)

I anticipated explaining to the cashier that it was for charity, not for me; but she didn't ask. I mean, she kept a GREAT pokerface the whole time. On the conveyer belt was, yogurt, greeting cards, baby cookies, random other stuff and the bra. Yeah, she didn't flinch. I was beyond impressed.

Ok, ok. Enough about all that...so I finally get my mosaic tiles and I realize, I can't start hot glueing this hanging on a hanger. Its too heavy. So I start looking around the kitchen for something that would keep its arched shape...when I saw it, the KitchenAid mixer!! WAHOO! It was perfect!

Whip up some mashed potatoes for dinner AND hold up your charity bra- duel purpose I tell ya!! 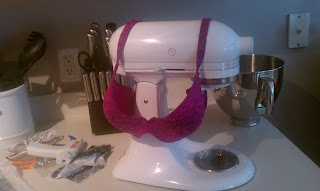 I started attaching the 5/8"x5/8" mosaic tiles to the straps. Since they weren't on a mesh backing, but a paper backing, I had to soak the straps with a wet paper towel, and then peal the backing off. One tile at a time. A little tedious? Oh yes. Worth it? ABSOLUTELY!! 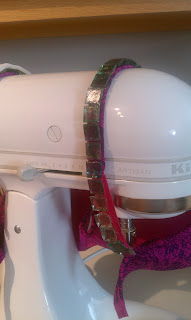 When I was completed, the bra weighed in around five pounds. I added the mosaic tiles to both straps, got different mosaics, which were on a mesh backing, and hung them from the under wire, got long peacock feathers and glued them to the inside of the cups, and then a peacock "center piece" for the middle. 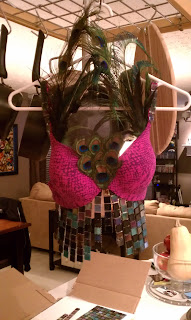 Here's one thing I didn't think about: driving it to the drop off point. It looked like this in the car: 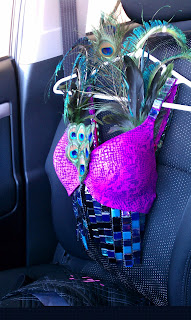 As I'm driving, I get to a stop light and my son and I are singing...when I look over at the car next to me. Its a guy driving a truck. He looks at me, looks at the seat next to me. Sees the bra. Looks back at me and kinda half winks, half smiles. I wanted to DIE!! I can only imagine what he thinks I do in my spare time...(while I'm not raising my son, running my business, taking care of my husband, running my household, teaching and working on projects- I have time to wear a peacock, mosaic encrusted bra. Yeah.)

I haven't heard back from the auction, so I don't know if I won 'Breast in Show' or not...but if I won or not, I'm just so happy and thankful to have been part of something so wonderful for so many people...and if nothing else, it make me smile when my mom walked in to my kitchen (while the bra was on the mixer) and she looked at the mosaics, looked a the bra, looked at me and said, "Oh dear."

I cannot tell you how many times growing up, I'd be working on a project and I'd hear her say, "oh dear"...haha

Erin
I've been blessed to know what I've wanted to do for a living since I was eight years old. I've studied hard, worked harder and I'm still loving every second of it!